I have worked with textiles for many years and have always had a passion for clothes and accessories, particularly vintage and antique styles.  Also an avid collector of old and unusual things, it is great to be able to incorporate many of my finds into my work, not only in making heavily textured and decorated, military and gothic inspired jewellery, but also my curious art boxes. 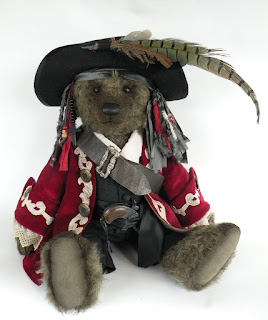 I started out as a window dresser, then fashion house press officer, through to making theatrical costumes and then in 1990 I began making collectors teddy bears under the name of Mister Bear.

My first collection of jewellery was launched in 2010 and early pieces were chosen for the 'Bling' Exhibition at the V &amp; A Museum of Childhood in Bethnal Green.

I like to use antique and vintage components as much as possible, old linens and grosgrain, layered with lace, vintage faux gems and pearls, seed beads, military regalia, glass eyes and skulls.  My life long passion for collecting old and interesting things has been inspirational in my work and the detail is all important to me.

In 2011 I began to explore the idea of confinement and restriction through the assemblage of found objects.
By exploring our curious fascination with death, religion and the macabre, via gothic Victoriana, taxidermy and a bit of theatre, I found one object led to another and stories began to emerge. 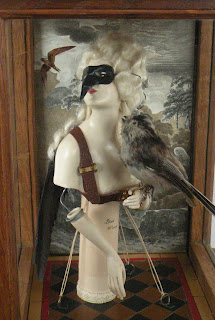 The use of antique glass fronted boxes, gives a framework with depth for the objects - antique figures, doll parts, taxidermy, glass eyes, skulls and ephemera, often altered and adapted, other objects I  recreate with polymer clay, fabric and card.